It was chilly and rainy last weekend. It was a taste of the autumn to come and, though early next week the temperature is predicted to rise to 28° C (82.4° F), under a sunny sky, there are more cold days ahead over the next few months than warm.

But the Cosy Apartment’s newest guest, Horace, was purring on my lap as he looked out at the weather. It was just a few days ago that he was out there, and would now have had to find shelter against the blustery and wet discomfort. He is still being harassed by Hector periodically - though it seems not to other him much - and I don’t feed him enough soft-food for his liking, but little Ivory is doing very well, and hasn’t shown much interest in going outside again, though he likes to watch it from inside.

This is why I like fostering. There are many, many, many cats who will never know the warmth and security of a home. But there are some who do, and it has been my good fortune to help in that regard. I consider it my good fortune because it gives me purpose, and when Horace lies purring on my lap, I know that I am in rescue as much for myself as for these cats. There aren’t many activities in which everyone involved benefits, but rescuing animals is one.

(Now, as an aside, I would like to ask of one of my readers, Roberta, with what medicine she treats her Joey’s eyes, if any. Horace’s eyes are improving with his drops, but they may never be entirely free of what appears to be a mild infection. Also, Kea’s Derry is having eye problems. I would be grateful for any details you could give us.)

(UPDATE: not for the first time, I deleted someone's comment instead of publishing it. The commands for these actions are next each other in the moderation panel. There is no offer to re-consider deletion. Roberta was kind enough to respond to my question about her Joey. I responded by deleting her answer. However, it remains in my moderation panel and I am including it here because she took the time and effort to respond, and because it may prove valuable to more than a few people whose cats' eyes are afflicted:

“Thank you for your question, John. Over the years, Joey has been on many different eye drops for his herpesvirus eye issues: Neomycin, Terramycin and most recently Ofloxacin to name a few. Unfortunately, these are antibiotics which really are not that effective against viral infections. There aren't a whole lot of antiviral eye medications. It's like having a cold - you just have to let it run its course. But it is important to know that cortisone should not be used for a viral infection - it will make the infection worse. But that said, it is good that you're having Horace's eyes checked by a vet. You certainly want to avoid complications like a corneal ulcer. Some of your readers recommended l-lysine. Some vets feel it boosts the immune system while other vets feel it does not. It certainly couldn't hurt to give it to Horace. However, please check with your vet before giving Horace any medication or supplement.”) 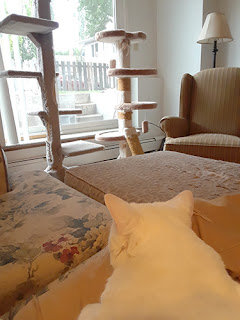 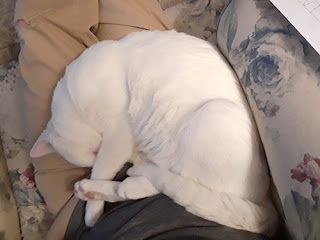