While Life is Kind

I haven’t written about Renn on the blog in a while. The fact is that there is little to write about regarding my big boy, which, at his age, is probably good. He is fifteen now.

Thinking about Renn - indeed, about all my cats - clarifies my philosophies sometimes. Renn is doing well, for the most part. He has off-days. I can tell those days because he doesn’t want any breakfast, which for him consists, as do most of his meals, of two varieties of hard-food. His off-days usually - though not always - have him throwing up later. This upchucking is sometimes caused by hairballs, sometimes not. I have tried hairball remedy, but it doesn’t appear to work in his case. I have also used Cerenia to calm his stomach, but, unless it is injected, it has little effect. The pill-form doesn’t work for Renn: he will frequently just throw that up, too. The same may be said for slippery elm.

Renn is doing all right. At fifteen years of age, he is old, but not very old. He is thinner than he used to be, lighter. He has lost muscle-mass. He doesn’t eat nearly enough for my liking, but ever since he came to live with me, he has been a sparse eater. He consumes almost no soft-food, but drinks a satisfactory amount of water. (I have two bowls in the bedroom to which he resorts; they are conveniently placed for him and I make sure they are always full.) His litter-box habits are regular. He doesn’t play any more, but moves about, not always remaining in one room or in one spot. If he can’t jump as far as he used to, and has to scrabble for a hold now and then, he still gets to where he needs to, with the aid of stairs.

In short, Renn is healthy enough for his age and condition. I believe it is our duty as the guardians of our animal friends to make sure their lives are as pleasant as possible for as long as possible, and not merely the latter half of that formula. I might be able to find a cure for Renn’s periodic nausea if I were to take him repeatedly to the veterinary hospital. But from previous consultations, I know that the doctors aren’t sure of the causes of Renn’s problems, and, while my big boy doesn’t suffer the anxiety that such visits bring many cats, such appointments are hard on him, nonetheless. There would be various medicines, liquid and solid, for him to consume, different foods for him to reject, and all so that he could live two or three more years in marginally more comfort than he feels now.

So I will let Renn continue as he is. He has his off-days, one a week, perhaps two. But as long as his good days out-number his bad; as long as he purrs as much as he does now; as long as he wants to lie beside me every time I relax on the bed; as long as he pushes his head against me for rubs; as long as he tells me when he wants food, I will know he is content, maybe even happy. If these things change, so will my plans for him.

But right now, life is kind to my big boy. 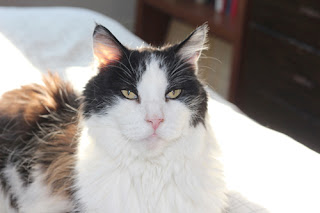