Renn had a bad day yesterday. It began with him throwing up a hairball in the wee hours, and continued with him puking several times through the day while I was at work. I think he also felt poorly enough to miss the litter-box when he tried to wet. The best that could be said about the day is that he didn’t seem to bring up any food, so what he ate Wednesday did him good. But he threw up any water that he drank, at least until last night.

I thought Renn was feeling better very late last night, but this morning, he was lethargic and uninterested in food or water. He did not upchuck last night, which is an improvement. When I went to work, I left him locked in the bedroom with his two preferred kinds of hard-food, plenty of water and a litter-box. This way, I will know if he eats anything - I think even on good days, he waits for me to return from work and set out his bowls for him (otherwise his fellow beasts will empty them); I don’t think he eats any of the other food generally available during the day. I will also know if it is he who diminishes the water in the bowls - if it is diminished - and if and how much he throws up.

If he doesn’t eat by tonight, I will have to force-feed him by syringe. I am less concerned that such an activity keeps him fed than that it keeps his organs working to fight fatty liver disease. This too will be a challenge since, as may be imagined, trying to put food into someone who tosses back up whatever goes down is a difficult proposition. That’s why oral Cerenia, slippery elm and other medicines rarely help him in such instances.

As I wrote about my big boy exactly a week ago, he has his good days and his off-days. Usually the latter last only for that day, and he recovers decently thereafter. Sometimes, the bad periods endure for a couple of days. Eventually, I know, there will not be a recovery. I am hoping that that day has not yet arrived. 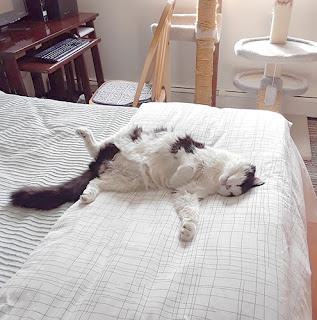