Renn is recovering from his latest off-day. As readers may recall, it began Wednesday night; it continued until Friday. When I came home yesterday, I saw that my big boy had thrown up some coloured fluid. He had also nibbled a little hard-food – which had not come up – and wet in the litter-box, so he had acquired some extraneous water at some time.

What was encouraging was that he ate some soft-food for dinner. It was a very small amount, not enough to keep a mouse’s tummy from growling, but the point was that Renn ate and, moreover, wanted to eat. But it was certainly not enough, so I force-fed a single syringe-worth of Recovery-and-water into him. Then I waited to see if it would stay down.

Later, Renn expressed a wish for some hard-food, of which he ate a small portion. This was repeated through the evening, punctuated by drinks of water. Before bedtime, I risked another syringe of Recovery; it might have triggered more vomiting – the amounts he was eating voluntarily were probably what his stomach was telling him he could stand – but force-feeding not only puts needed nutrition into a cat, but often impels them to eat of their own volition.

There were no unpleasant sounds or sights in the night, and this morning, Renn ate his usual hard-food breakfast, served while I clean litter-boxes and refresh water-bowls. Then, surprisingly, he ate what was for him a good portion of soft-food. He has shown no sign of intending to return it to me.

This episode was a bad one. I called the veterinary hospital yesterday afternoon, but they had no openings until the first week of September; my town is now feeling the press of business in this regard that everywhere else seems to be experiencing. The best I could arrange was a ‘drop-off’ on Wednesday: an animal is delivered to the hospital first thing in the morning and a doctor sees to him in a spare moment during the day. The disadvantages of that arrangement need not be elaborated.

I will, however, take the advice of several readers and talk to my doctor about acquiring some B12 or Cerenia, possibly both, for injection at home. The latter drug would be kept for emergencies, while the former vitamin could be a regular dose. I have no idea if they will provide these under those conditions, how long Cerenia or B12 will stay effective in a syringe, or whether a visit to the hospital is necessary. These are things to discuss with the veterinary. My benefit is that I am well-known to a couple of the doctors and they know my experience with cats.

For now, however, I am relieved. I thought that Renn’s big moment might have arrived. I expect it to come in such a guise: a similar episode from which there is no return. But I think I can now safely write that whenever that moment arrives, it will not be today. 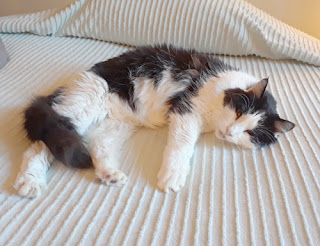