Horace and the Veterinary Visit

The veterinary visit went well for Horace. He didn’t mind being at the hospital until the examination. He is not one for being held and turned and twisted. But the results were good.

He has a mild case of conjunctivitis, for which he has received eye-drops. I put the first of them in this morning. I recall doing something similar for Tucker. It was just a matter of tipping the roly poly’s head up and squeezing a drop into each eye. It was easy. Horace is not Tucker.

Little Iv’ry has some tartar on his teeth, but that’s natural for a two year old who has likely never been to a vet prior to being rescued. His mouth will be monitored, though it’s not a serious concern right now. His ears will be cleaned again and he will be treated with more medicine to make sure his ear-mites are gone. Otherwise, he is in good shape. His heart and lungs sound well, and he weighs 6.4 kilograms (14.11 pounds), which is satisfactory for his size.

Horace was unfazed by his appointment. He didn’t like it, and was glad to be brought home, but had a little something to eat as a reward for his troubles, and then spent some time on my lap. He seems to take things calmly, without much visible stress, though he did shed a great deal in the examination room. He appears to be a cat who doesn’t dwell too much on anything unpleasant, and simply moves on to better things.

This was one of his better things, later last evening. 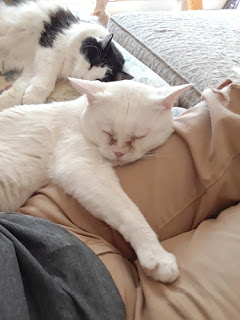