Favoured Times in a Favoured Season

I enjoy the autumn. Winter with its untrodden blankets of snow and the warmth of one’s home, out of the cold, is a treasure. I like spring, as well, when the temperatures are pleasant and the greenery is bright and fresh. And summer, with its moonlit, balmy nights and sunrises of clear weather, is something to look forward to. Each season has its place in my affections.

Autumn, though, especially the first half of it, has something a little more than the others. There is a softness to nature at this time, perhaps a weariness, something that strikes a chord with me more and more as I age. The trees and the grass are ready to sleep; the sky’s blue looks rather thinner, and the sun sets earlier, urging people indoors to their homes.

The last weeks of September and the weeks of October are a favoured season, when even heat, as we are experiencing now, doesn’t bring the sultriness of July and August, but rather a softness, like floating in water of one’s own body’s temperature.

In the Cosy Apartment, the sun’s light is less dense, less yellow, and slips into the rooms at an angle, as if trying to give the residents the benefits of its last appearances this far north. The beasts this weekend took advantage of the late afternoon; they had eaten, their tummies were full, and they rested. All was quite; the windows were open to the pleasant degrees the thermometers were giving us; noises from outside, automobile traffic and children playing, were muted. The cats were content and still.

These restful moments are a favoured time, when feline quarrels are forgotten, anxiety over whether a food-bowl would arrived is dismissed, and only the comfort of home is known.

Favoured times in a favoured season don’t come every day, and when they do, we greet them as friends we appreciate. We are grateful to them. 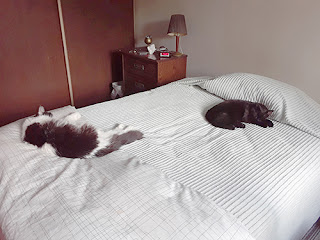 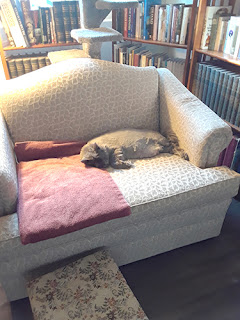 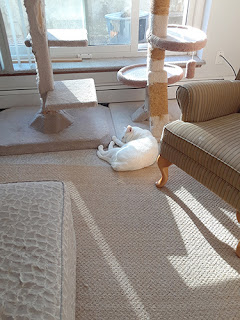