Horace is feeling under the weather today. He threw up several times during the night; this morning, I found small amounts of a hairball, so that may be what is causing his distress. He didn’t want anything to eat for breakfast; even placing a dish with a small portion of food before him elicited a pathetic whimper, as if the sight and smell of it was too nauseating for him. I don’t think it is a serious ailment, though he is probably feeling enough discomfort to disagree. I will try some hairball remedy on him this evening, if he has not recovered. 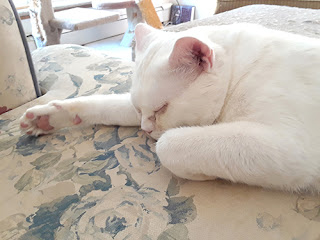 In better news, I am in the process of buying a bottle of Cerenia for Renn. My big boy, as readers may know, is prone to vomiting, his stomach becoming upset and causing him to refuse to eat. He consumes a small amount of food as it is - he always has - so not eating, and bringing up what he already has eaten, is a problem for a cat who is always losing weight, albeit gradually.

I have tried to use Cerenia in pill form, but the mild absurdity of giving medicine orally for something that makes a cat puke is patent. Injecting the drug has usually calmed Renn’s stomach and, even if it doesn’t immediately restore his will to eat, has made him feel better. No one at the animal hospital knew how to charge for the bottle, as it is always paid only by individual injections. Giving a whole bottle to a client is something new to them. Renn’s doctor knows that I have had practice in giving injections, and saw no problem with the provision.

The cost is great, but will give me enough Cerenia for thirty doses. Of course, I don’t foresee Renn needing that many in the relatively short time he has remaining with me. Even so, it is a bargain per injection, especially when a single visit to the veterinary hospital, for any reason, will sometimes cost as much as a hundred dollars. As well, the Cerenia, if kept chilled, will last a couple of years, even after the seal is broken.

I was reminded that Renn’s chronic vomiting is likely caused not by irritable bowel syndrome, but by his failing kidneys. The former cause was one that was discussed, but ultimately rejected. My big boy’s kidneys are dying, and, considering the continued weight loss and periodic unsteadiness he experiences, their failure has probably progressed to stage three or even four. I see no advantage in taking him in to be examined in that regard. All that can be done for his condition is treatment for the symptoms, which is being done.

But with Cerenia, I will hopefully be able to prolong Renn’s comfort, if not his life, and that is not at all a bad item on his health report today. 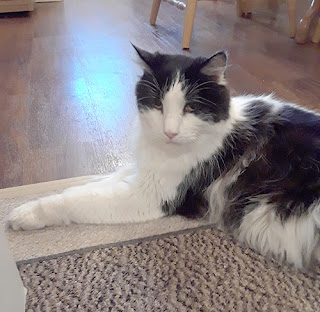