The Hairless Cat and the Cooler Nights

The nights are now quite cool here, sometimes even chilly, despite autumn being now a day away. I have noticed Neville - temporarily, my Russian hairless - not only curling up in the cat-beds more often, but avoiding the rooms with the widely opened windows. Without his heavy coat, he is feeling the lower temperatures more than the other beasts.

So I am keeping the library window closed at night, and have brought out the heating pad. It is actually a wide strip, and I put it under a heavy towel. Neville seemed to like it last night, and this morning, while the day was still dark, I caught him making use of the warmth.

As the old saying goes, ‘when the hairless cats start using the electric heating pads, winter can’t be far away’. (That’s not really a very old saying…) 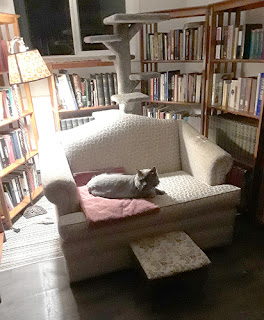