Though not about my cats, this article is about cats - of course. Autumn is almost upon us, and it’s appropriate that readers spend some time in the pumpkin patch. Welcome to the Lethbridge PAW Society’s pumpkin patch… 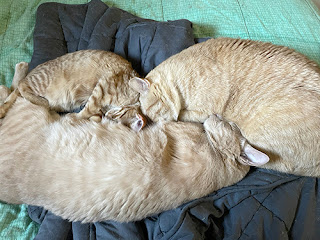 These handsome, and unconscious, mancats are Tyson (upper right), Sora (bottom) and Cashew (the little one). They share a foster-home and, as you can see, are great friends. That’s not surprising. Tyson - ‘Uncle’ Tyson, as he is known in the rescue group - is almost three. Friendly from the outset, he was likely abandoned by his people. He was found with a bad wound on his leg, which healed nicely long ago. His peculiar quality is his love for kittens. If we have orphaned kittens in the rescue-group, Tyson is sure to take care of them, grooming them, playing with them, comforting them when they cry for their lost parents. He teaches youngsters how to be cats. He’s helped raise four sets of kittens.

Sora, not quite a year and a half, is a beneficiary of Tyson’s wisdom and affection. He and his siblings were born in the wild and eventually trapped with their mother. All the kittens were easily socialised but Sora became a good chum of Tyson; his apprentice, in a way, for he too has helped in raising kittens.

Little Cashew, five months old, has two uncles looking out for him - and for his brother and sister, Brazil and Hazel. Their other brother, Peanut, was inadvertently separated from his family when the mother-cat moved them. He was too rescued and is already adopted. Cashew and his siblings are learning feline ways from Tyson, Sora and the others in their foster-home.

All three of these orange boys are available for adoption and, as you can see, get along very well with other cats. Tyson and Sora would make excellent godfathers to youngsters currently without mentors, and Cashew, Brazil and Hazel would make fine family members, together or separately. If you live in Lethbridge, Alberta, go online at pawsociety.com to learn more about them.

After all, with the coming of autumn, the early darkness at eventide, and the chilly air, wouldn’t it be wonderful to come home to your own pumpkin patch?